Early in the month of May, historic Lincoln town celebrated Heritage Preservation Month with many events, tours, presentations and living history shows. On the evening of May 9, the public was invited to “Meet New Mexico Authors,” complete with an authentic open-air “La Junta” chuck wagon supper. 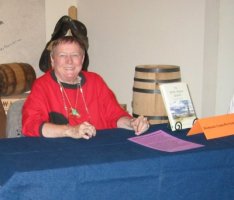 The presented authors were: Barbara Corn Patterson, Betty Sims Solt, Paul Patterson and Chuck Chatneuf. These authors have written cowboy poetry, early ranching memoirs and a variety of fiction and non-fiction on localized subjects. Barbara of Roswell presented her first book, a memoir, Rock House Ranch (which RWM reviewed in a prior issue); Paul — a longtime foreman for Robert O. Anderson’s huge Diamond A ranches — who says he “now herds words across paper instead of cattle across a pasture,” has written several books reflecting his chosen career; Betty is a 1990 cowgirl-hall-of-fame inductee, rancher and cowgirl poet; and Chuck has written his first book, a period novel set in Lincoln County. A review of Chuck’s book follows below. 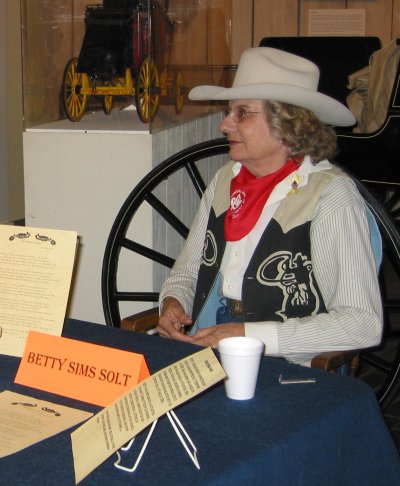 The turnout for the chuck-wagon supper was small but intimate. Soon diners felt like long-time acquaintances. In addition to the authors were a handful of others, from local and not so local places.

From fairly local was “New Mexico’s Bear,” Joe Baker, of KNMB radio in Ruidoso, who says, if you listen in, he “will make you feel as if you were having a cup of coffee with him by a flickerin’ campfire when you tune in to his ‘Backforty Bunkhouse Show.”

Jay Barber from Lake Havasu happened to be passing through, taking a visitor on a whirlwind tour of the west. That visitor, from India, had been in the U.S.A. for only a month but spoke English well. During introductions, he politely said his name was too difficult to pronounce or remember, suggesting we adapt a portion of it that sounded nutty. He said just call him “Nutty, you know, like the fruitcake.” His keen sense of humor, reflected by Paul thereafter calling him “Fruitcake” added dimension to the enjoyable evening. 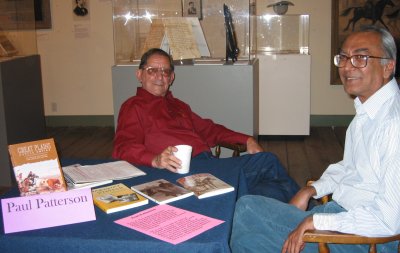 Paul Patterson and Nutty
An email we received May 18:

Nutty and I got home safe and with a lot of good memories. We really enjoyed getting to know some new people like you folks. We had a great time at the chuck-wagon/dutch-oven cookout. If you ever get to Lake Havasu, look me up. Nutty will be returning to his family tomorrow. 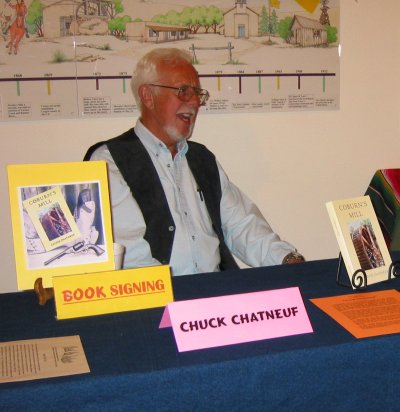 In COBURN’S MILL, Chuck Chatneuf writes a fine western tale. It’s as if writing novels has long been his forté, not like this is his first. Chuck’s style is somewhat reminiscent of Louis L’Amour, but with a more modern writer’s touch. When he writes about Tom Corkin tamping the tobacco in his pipe for a good draw, you figure Chuck smokes pipes. When he describes the terrain of Lincoln County, you figure the author grew up there, spending his youth climbing all over those rugged hills and vales. If you thought the latter, you thought wrong.

Chuck and his wife, Pat, now make their home in the mountains near Ruidoso, but that wasn’t always the case. His life began in Connecticut and he spent his youth in Texas, which is also where he began to earn his living. He became a machinist and along the way earned a BBA in behavioral management, developing useful skills for his management roles in industrial and manufacturing companies in lands beyond New Mexico’s borders.

Seeking adventure has always been his avocation. Fishing, exploring, canoeing, hiking, skiing, skeet-shooting, motorcycling, racing sail boats, piloting his own plane and following historic trails cut by early pathfinders have been a few of his chosen pursuits. Since his retirement to southeastern New Mexico, some of those have been replaced with novel-writing and golfing. He has begun a second novel set in modern-day Ruidoso.

A recent reviewer in Writer’s Digest called Coburn’s Mill “an old-fashioned western adventure in which frontier towns spring off the page.” Roundup Magazine calls it “a good read on a cold night.”

Chuck’s characters are strong, complex but believable, and with whom his readers soon feel well-acquainted. His casual dropping of a few familiar names and places into his fiction is well-done, giving the reader a subtle thrill of discovery.

His book is well-plotted and delivers interest and tension from its first pages to its last. There are parts where, even if the dinner bell rings and your stomach rumbles, you cannot put it down. Along the way he scatters bits of detail — like birdseed on the trail — to harvest at its satisfying end.

undelivered. And the bright, sunny days

that play havoc with my misery

But most of all, I remember the windy days

tugging at my soul,