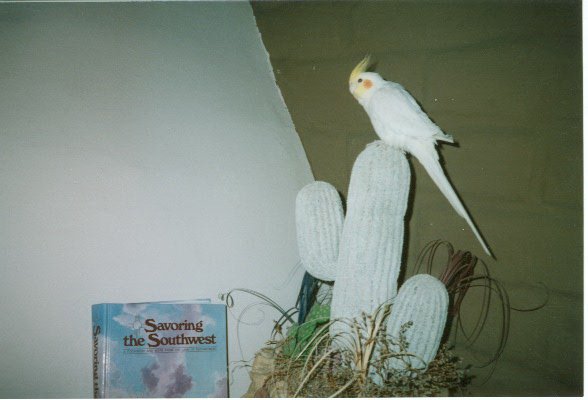 COCK OF THE SQUAWK
by Jan Girand

I discovered Pretty Bird was a watch-bird soon after Jerry, my brother, and I presented the cockatiel to our mama on her birthday some years ago. More specifically, he was a watch-Mama-bird, a hidden asset we had not anticipated but soon found to be priceless. While Bird lived with Mama in her apartment, he kept a cocked eye upon her.

Are fowls natural watch-birds? Farmers and ranchers of domestic birds — roosters, ducks, geese, turkeys and even peacocks — have found that to be true.

A few years earlier, Mama developed the rapid type of macular degeneration, an incurable blinding condition. Her diminishing sight and other things caused her to have poor balance. That was one of the reasons we decided she should no longer live alone in her house across our small New Mexico town from my husband and me. We thought the best solution, which would reduce her isolation but give continued independence, was to build her an efficiency apartment onto our home. It was a grand plan and she endorsed it.

My husband, Dan, and I had designed and built our adobe house in 1985, so an adobe add-on seemed a natural solution. I soon found myself, a grandmother of an adolescent, playing in the mud. A couple fellows and I made the 42-pound adobe blocks, and I with three different fellows built her an adobe casita onto our adobe hacienda. Not to brag, but I thought it was nicely done.

Soon after Mama was settled in, Jerry came for a visit for her birthday. He and I put our heads together to choose the right gift for a poor-sighted animal-lover mother such as ours.

Jerry suggested a dog, a companion to replace hers that recently died. I halfway agreed. An animal companion, yes; a dog, no. She already had two, ours. Because of our policy of the open door between her digs and ours, Mama already had the pleasure of their company since they passed through at will. Their will, that is. Creatures of comfort, our two small poodles could be found wherever there was a lap. That was most often in Mama’s apartment. And at least one retired with whomever of us first went to bed; that was usually Mama. When they did not spend the night with her, the first thing they did upon rising in the morning – after stepping out for their toilette – was to rush to her pad and heartily wish her good morning. They instinctively knew when it was noon and headed to her side where they were sure to receive surreptitious treats. In the long, lazy afternoons, they could be found napping in her lap while she too was nearly napping but pretending to read, sitting properly upright in her chair with chin propped upon her hand.

“Another dog she doesn’t need,” I told Jerry. “She falls too easily; she doesn’t need another obstacle underfoot. She already has two too many. A bird to listen to, to talk to, is the perfect gift for her. She once had birds, parakeets and canaries, when we were kids and she adored them. Remember?”

Jerry was doubtful of a bird pet but, since I have been nearby and he far away except for visits, he acquiesced to my greater experience with our mama.

He and I visited the pet shop and came away with a male – so we were told but how could they tell? – cockatiel, complete with large cage, food, cockatiel manual and all the comforts we believed he’d need in his new home. He was a handsome fellow; white with rouged cheeks and expressive yellow feather-plume on his head. When we presented him to her, our tiny mama clasped her hands to her bosom and squealed in delight.

Thus began the too brief 3 1/2-year saga of Mama and Pretty Bird, the name she gave him at first sight.

From across the house, Dan and I could hear her talking to him, and his nearly constant chatter. He could be soft-spoken and pleasant toned; he could also be loud and shrill enough to shatter fine crystal and delicate ears. Then Mama clapped her hands to her ears, scolded and told him to hush.

He learned Mama-Speak — repeating words she taught him. However, sometimes by the volume and excited piercing tone of his voice, Bird alerted the entire house, Mama’s domain and ours, when something was afoot. That was usually Mama. Even if we were preoccupied and not paying attention, the ears of our poodles were ever tuned in to Bird and Mama. His peculiar screeching alerted the dogs, who made noisy dashes through the doorway to investigate. They and we learned that particular squawk of Bird’s either meant Mama had company or that she had gone outside through her own exterior door. Countless times a day, she checked the curbside mailbox in hopes of receiving mail. That was all right with all but Bird and poodles; they were just nosey and bossy. I learned when to ignore them.

Bird had a different, unique, piercing squawk that accurately, uncannily meant something was not all right. Off would go Tipper and Hojo to investigate. Then Tipper, the bossier, returned to fetch me. With heart pounding, I’d rush into Mama’s apartment as Bird continued his piercing squawk. I’d see him hunkered down with head hunched deep into his feather-fluffed shoulders, wildly racing to and fro on his perch like a frantic, tiny old man. Tipper would excitedly lead me outside to Mama. I’d find her upended in her side-yard behind a tall fence pulling weeds, at risk of falling on her face or already fallen. I might find that she had done the forbidden — gone out her back gate, crossed a heap of discarded adobe and construction debris, walked up the angular secluded alley with a loaded trash bag to the huge lidded dumpster shared by our block. If she fell, a real possibility, she might lie back there, unseen, for hours.

How did Bird, and subsequently Tipper, unerringly know when to fetch me? After Mama came to live with us, Bird and Tipper gained tremendous credibility with us, and with Mama too.

“How did you know?” Mama would ask me.

“A little Bird told me. And Tipper too.”

Mama never failed to graciously thank each of them for looking out for her. “My guardian angels,” she called them, as she patted each head, even Bird’s, with a gentle finger.

However, there were times when she did not know I listened that she told them to mind their own business.

Dan and I inherited Bird when Mama left us seven years ago. He is still fat and sassy but since Mama departed, he no longer gives that particularly piercing squawk. Do you suppose he knows … that his guardianship duties are done?