WE GET EMAIL
This is an Email we recently received from a correspondent in Oregon, herewith published with his permission. (It was sent to us just before he learned his wife, Betty, has the same type of cancer). This 10th issue of Roswell Web Magazine is dedicated to her. RWM

THE GERMANS’ WEIRD SENSE OF HUMOR

A former colleague, Ray, unfortunately has contracted cancer. As I’ve performed mindless tasks around the yard, I’ve thought about him. I recall, for example, a plenary briefing he gave at a conference in Munich in ’79 that absolutely wowed our hosts. His was the best briefing our delegation gave, and I mentioned it in a brief get-well note to Ray.

In his response, he recalled that I and another member of our delegation ordered “bear ham” at an expensive Munich restaurant. Having never had “bear,” knowing no German, we ordered it with the encouragement (and probably secret amusement) of our hosts. It looked like long-preserved salami and tasted like greasy leather — who knows what the original animal donor was? We both felt like jerks. The restaurant otherwise seemed excellent and all of the rest of our delegation had a great time.

Even worse, when we went to Nierschwanstein, mad Ludwig II’s castle perched on a mountain top in Bavaria, the Germans made us ascend a steep mountain path packed with ice and snow to reach the castle. Not expecting to go mountain climbing in the winter and wearing slick-soled wingtips and a business suit, I couldn’t remain upright — to the huge enjoyment of our hosts. When we finally got to the top, I spotted a road that led up the the castle!

Author Ken Hudnall was at Roswell’s first major UFO festival on July 4th, 1997. His book, The Occult Connection: UFOs, Secret Societies and Ancient Gods, was well received; he sold over 50 copies that day. The title is now in its fourth edition. He now also has several other books out. His “sell sheet” for the 4th edition of The Occult Connection is shown below. 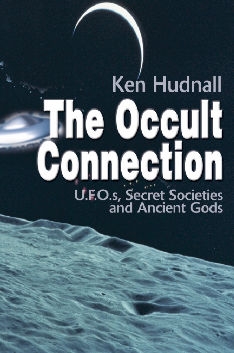 Legends abound about the Gods who walked the earth at the beginnings of time. In The Occult Connection, Ken Hudnall explores a connection between these Ancient gods who once ruled the earth, the UFOs that populate our skies and secret societies which seem to have influenced the development of our society since the dawn of civilization. Is it possible that the Gods intend to come back to rule mankind directly? Do these mysterious beings walk among us today? Come explore these possibilities in this first book of a series which deals with these unusual events.

Marketing: This UFO classic was issued 1990 as a spin-off of Adventure Radio, a nightly talk show that was broadcast out of Anaheim, California in the early 1990s. The Occult Connection has been in print ever since and is now in the fourth edition.

The author is a former Infantry Captain who is now a 100% disabled veteran. Since becoming disabled he has worked in a number of professions ranging from radio talk show host to college professor to attorney. He has written several other titles including seven legal texts and three adventure titles.

Unto us a child was to be born. But the doctor said he would be too tiny and delicate to survive. The two- and three-year old siblings were told that even if the child were born, they could not keep him.

“Why can’t we keep him?” was the children’s frequently asked question.

“Because he’s not ready yet.”

“Why?” the questions continued. “Isn’t he all there? Doesn’t he have a heart?”

“Indeed he has a heart, but he will be an Angel Child.”

At last the child was born, weighing three pounds, and for a while even less than that, but it would be almost two months before he could go home from the hospital. He arrived home in time for Christmas, but was still regarded as an Angel Child. His name was Devin.

One day, the child’s brother and sister were asked to watch the baby as he lay on a bed while the mother went to get a nearby diaper. When she returned and stood briefly in the bedroom doorway, she watched the brother and sister in serious whispered conversation, their hands groping inside the back of the baby’s nightshirt.

“What are you doing?” asked the mother.

“We are looking for his wings,” they told her. “He is an angel child, isn’t he?”

Their mother wrote a child’s book, each of them with starring roles, that became their favorite bedtime story, titled “Angel Child.”

Eventually, as children do, the child grew up. For some reason, he always had a desire to fly. He joined the 82nd Airborne and got his wings, but instead of on his back, they were sewn onto his chest. On his back, instead, was a parachute, and for two years, he jumped out of perfectly good airplanes.

When Devin was discharged from the U.S. Army and came home to Roswell, he and two others formed a sport parachute club. For a year, he jumped out of perfectly good airplanes at every opportunity. If it had to be — and his mother feverishly wished it didn’t have to be — she wanted to be there. His mother and step-dad became the ground crew and far too often hung around the DZ (drop zone) for their boys to drop by. Besides Devin, briefly their two other sons also jumped.

That year was filled with many exciting events. Only two will be mentioned here. Devin’s elder brother visited for the holidays and was determined that he too would jump. Early that morning, three parachutists jumped from the plane. The first one out was the elder brother, David, because as a novice, his was a static line jump from a lower elevation. Next came Devin and then the jump-master doing free falls from far greater heights before pulling their ripcords. Three bodies plunged too briefly through the sky. A wind scattered them. The three were carried, separately, away from the DZ and into great peril over the city.

The ground crew ran, via vehicle, in anguished pursuit of the first jumper, who would be the first to hit the ground. After a wild run, including jumping curbs and dashing through alleys, they found him sitting nonchalantly on a curb surrounded by large broken tree branches and fascinated spectators.

As he came down, he barely crested a roof top, crashed through a giant cottonwood tree, and — understandably — was unprepared to do a proper PLF (which I thought meant proper landing form) when he hit pavement.

“Are you all right?”

“Then come on. Hurry! We have to find the other two.”

“Uh, I will require some assistance. I believe I have broken something.”

Spectators and crew helped him into the car and they rushed off in search of the other two. The jumpmaster was found where he landed in the middle of Eighth Street, and Devin floated down into a bewildered elderly resident’s enclosed back yard. As the resident wandered about, he was amazed to hear a lofty voice calling, “Ahem, excuse me, do you mind stepping aside, sir?” just before Devin landed beside him. He barely had time to make his apologies to the old man for dropping in so briefly announced, before jumpers and crew sped away for the hospital. In route to the hospital, the jumpmaster cut David’s combat boot off his swelling foot.

At the hospital, X-rays showed David had a badly broken ankle. He insisted that he had to return to San Diego, his place of residence while he pursued a doctorate degree, for its repair. Ultimately, the repair included bolts, screws and a plate. As his studies specialized in nuclear magnetic resonance, he daily worked in a magnetic-field lab. With his steel inserts, his worried mother envisioned him magnetically stuck to the walls of his lab, or his steel bolts unscrewed. When she foolishly shared her concern with her husband, he laughed and said it was she with the screws loose.

One weekend, the sport parachute club flew to Odessa, Texas for a gathering of other jumper enthusiasts. By now, Devin had amassed 100 free-fall jumps. Devin, his jumpmaster and another jumper, who usually piloted the plane, jumped before a large crowd of spectators. Devin, the first out of the plane, had a parachute malfunction. He began to spin wildly, his ‘chute dumping air.

The following scenes are hard to follow… point your mind’s eye or camera first on one and then another.

Devin knew he had to do a cut-away of his main parachute, and pull the D-ring to open his smaller reserve. Falling quickly through the sky, after he performed the cut-away, he pulled and pulled on the D-ring to his reserve as the ground rushed towards him. The reserve would not open. He pulled so hard that the steel cable on his D-ring was permanently coiled, and he knew he was about to die.

Vern and Glen looked out of the plane and saw Devin in serious trouble and wondered why he did not open his reserve. They both jumped out and did dangerously long free-falls, futilely hoping to catch Devin in mid-air.

Spectators on the ground believed they were helplessly watching a man fall to his death. The controller in the tower called the national FAA to report a jumping fatality.

The blood-thirsty media — TV, radio and newspaper reporters — picked up the call and rushed to the DZ looking for a bad body and a good story.

Devin landed in Texas-sized mesquite bushes and boulders, and was briefly knocked unconscious. He awoke, checked himself to assure he was alive and fairly unbroken, and began to jump up and down, waving his arms above the brush and boulders to let spectators know he had survived. None could see him.

Vern and Glen, looking down as they descended from the plane, saw an agitated person jumping about with waving arms. They believed it was a spectator who had found the poor broken body. When they landed, they were amazed to see it was Devin.

“Guys, if I don’t go up and jump, I never will again.” They agreed that was probably so. They slipped back to the hanger to repack their parachutes, unaware of the furor outside.

They discovered the pin of the D-ring on Devin’s reserve had been inserted backwards, which was why his reserve would not open. When he had aborted his main parachute, it did not fully cut-away. It had hung uselessly above him, like an laundry bag containing nothing.

While they were in the hanger, the national FAA investigator called, asking for vital statistics of the deceased. Vern handed the telephone to Devin. The investigator repeated his question.

“You’re talking to him,” replied Devin.

Within a half-hour, unknown to the spectators and media, Devin, Vern and Glen were jumping again.

When Devin returned to Roswell that night, he told his mother about his adventure, only because his death might have been reported on TV and radio. He continued to jump, and his family was his ground crew, for the rest of the year, until he found less destructive things to do with his spare time.

His mother often fretted that she was to blame; perhaps calling him an Angel Child made him think he could fly. She wanted to warn other mothers to be careful what they called their children, for they are too easily impressed. Sometimes, however, when she recalls that unusually long free-fall over Odessa, she is very glad he believed he could fly.

Ah, the power of positive thinking.