(Following is a recent Email from my brother, who lives on the Oregon coast, reprinted here with his permission. This shows the contrasts between his wet environment and our dry one. Each has its own beauty and appeal.) 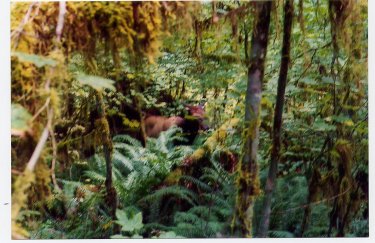 The Hoh Rain Forest of Washington’s OlyPen. Can you spot the elk lurking in the shadows?
OlyPen
by G.C. Sparks

We spent six days on the Olympic Peninsula (or OlyPen as Washingtonians call it). The main tourist attractions in OlyPen are in close proximity to each other: rocky seashore, the broad, island-studded Straight of Juan de Fuca, dense rain forest, rushing rivers, lakes, and the snow-capped Olympic Mountains in the background. The drive along the perimeter, however, is a checkerboard of clear-cutting, tree “plantations,” and forest.

Passing through the towns of Queets, Hoquiam and Humptulips (Washingtonians choose quaint names for towns), we arrived at Lake Quinault Resort, an upscale motel on the lake. As we motored over the lake that evening, the proprietor pointed to the skyline where a line of giant trees merged with saplings, defining the border between the park and the Quinault Indian Reservation. He said the Indians “cut constantly,” and indeed the next morning as we drove northward through their land, we were repeatedly confronted with scarred moonscapes of stumps and raw ground — in contrast with Indians’ general reputation as good stewards of the land.

As you know, the only way to see a park is to walk it, and we spent most of our second day hiking the intensely green world of the Hoh Rain Forest, which gets 150 to nearly 200 inches of rain a year. Except in scale, it bears some similarity to the temperate rain forest at Cape Perpetua, only three miles south of Yachats and near where we live. Both have towering, old-growth trees, shrouded in ferns and moss, which appear to be growing on stilts after their “nurse” logs rotted away.

While walking through the dense, moss-draped Hoh Forest, we heard bugling elk both behind and in front of us. We rounded a turn, saw a gaggle of tourists pointing cameras to the right of the trail at a bull, cow and juvenile male elk, the latter lurking hopefully in the background. The bull and cow were only about 20 feet off the path. The bull elk, in rut, suddenly charged the cow, which ran. He stopped, frustrated by the cow’s coy behavior, and glowered as us human voyeurs. She, like a teenage girl, didn’t run far. (Do female elk giggle?) Since the bull elk, a serious animal, seemed in a bad mood, we moved on, even as some of the other tourists tried to coax the cow toward them, “Here, sweetie!”

The following morning, we ascended Hurricane Ridge, from which on a clear day, one can see Canada and Seattle on opposites sides of the Strait. We couldn’t — the clouds were too low — but it was still impressive. And cold. Flecks of dry snow began to fall; some trails were still snowed-in from the previous winter. Many of the trees had lost their tops in winter storms. Black-tailed deer, appearing puny compared to our elk, nonchalantly cropped yellow grass near the trail where we walked. 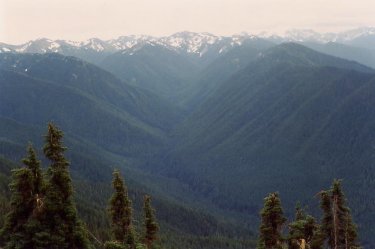 After Hurricane, we spent the night at a Victorian B&B in Port Angeles. The other guests, we learned, were there for a wedding and wouldn’t arrive until late. The wind rose during the night, banging branches and shutters against the house. At 1 a.m., the wedding guests arrived, cheerful after their festivities. At 3:30, there was a tremendous noise that shook the entire house. We were sure it was an earthquake. Instead, the top of a redwood tree had broken off and struck the house. It was a memorable night of a memorable trip.