by Joyce Abrahamson
I looked into your newborn face
And made to you this vow,
To never hurt the innocence
That I see in there now.
To always nourish mind and soul,
To keep safe and secure,
This precious life placed in my care
Whose love I will ensure.

When you’ve outgrown your toddler days
And leave your nest for school,
I promise I’ll have taught you well
About the Golden Rule.
The values that you learn at home
I hope will carry through,
For as you do to human-kind
Will thus come back to you.

I promise you when teen-time comes
I’ll be there by your side,
Not to thwart your hopes and dreams
But hope only to guide,
To make correct decisions,
To help you as you grow
And gain your independence.
You’ll do it well, I know.

When it is time to choose a spouse,
The one love of your life,
I promise not to interfere,
Or create between you strife.
For you’ll have made a sacred vow,
Each one to the other.
I promise you I’ll never be
A criticizing Mother.

When you have children of your own
I know they’ll be well taught;
The lessons I instilled in you
Will not have been for naught.
But when I hold my first grandchild,
Old rules will be forgotten,
About this I now promise you,
That I will spoil him rotten. 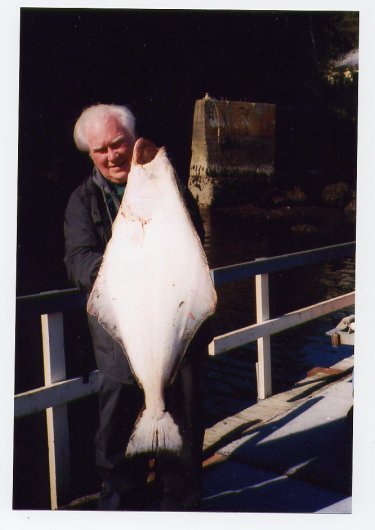 (Jerry and his halibut: he looks exhausted, as he should be after reeling in a 33-pound, 36-inch fish that was lurking 550 to 600 feet below the surface of the ocean! RWM)
FISHING: A GLASS HALF FULL
by G.C. Sparks
(Following is an Email from my brother, which I’m sharing with you. We, landlocked in New Mexico and with attention focused on our dire needs for water, should find this experience from a novice deep-sea fisherman intriguing. The initial fishing expedition herein described occurred off the Oregon coast not too far from where the writer and his wife, Betty, both professional people now retired, live in a two-story house near the ocean. It seems to me a good title would be Fishing For the Halibut. RWM)

Last Friday, I got up at 3:15 to go halibut fishing, a type of angling that normally attracts only serious fishermen and a new experience for me, a serious landlubber. There, I joined a line of good ole boys waiting outdoors in the dark to check in, some sipping vodka and wearing much-stained heavy-duty wet weather gear, the kind with bibs and suspenders to which they’d added tiny scissors and pliers on retractable lines for easy tackle repair. My new colleagues don’t spend a lot of money in barbershops or on razors.

Tradewinds, the charter company, deployed eight boats that morning, the first of a four-day sport halibut season. “My” boat, the Sunrise, was the first Tradewinds boat out of Depoe Bay, and then we and other boats raced 2 1/2 hours to an area called Chicken Ranch, where halibut like to hang out some 500 to 600 feet down. When we arrived, Chicken Ranch — halibut is the real chicken of the sea — was already full of small boats, some as small as 20 feet. There also was a Coast Guard cutter and, periodically, a chopper overhead. The News-Times reported that 250 privates, together with an unknown number of charter boats, deployed out of Newport for Chicken Ranch Friday; I never saw a number for Depoe Bay to the north, but the massing of small boats at Chicken Ranch must have looked something like the rescue operation off Dunquerque in WWII. (Depoe Bay owes its strange spelling to a local Indian who thought a French-sounding name would make him elegant.)

Reportedly, the Coast Guard is furious at the number of too-small private boats operating that far out, and punishes with heavy fines anyone unlucky enough to need help. Every year, including this one, a “private” goes down, but there are so many other boats around that usually no one drowns.

The day was sunny and began calm, but turned windy, creating white caps and causing our beamy, 34-foot boat to wallow constantly from port to stern so that one moment you’re looking up at the sky and the next down into the ocean — kind of like working in Navy Branch. While waiting and drawing the harbor scene, Betty said that she saw one small boat towed back (at a cost of $1,000) and talked to another private boat owner who returned exhausted from fighting a headwind and strong current in his small, underpowered, boat. Irresponsible fishermen reputedly kept the Coast Guard even busier on Saturday.

Everyone on our boat (14 guys) “caught” a halibut, including the father and son who never left their cabin. The father, an obese old guy (and, with me, one of three seniors on board), couldn’t stand upright on the rolling boat; his son was seasick the entire trip. The limit is one each.

I caught the seventh fish at 10 a.m., after which I had little to do until we returned hours later to port. Fortunately, mine (36 inches long, 33 pounds) was one of the smaller ones. We used three-pound weights to get down to where the halibut lie on the bottom. The weight, together with the depth, and a strong current meant that reeling in — even without a big fish on the line — is a lot of work. The heavy tackle and weight also also initially made it hard to get the feel of the fish. Despite the heavy gear, lots of fish broke free. At our second spot, I got a strike of enormous power that instantly snapped my line. I was lucky compared to another chap who lost three after fighting them almost all of the way up — his arms must have felt like rubber bands. The largest fish were caught at the end — three of them ran over 60 pounds — and they must have felt like hauling in a barn door from the deep. One had almost straightened out the heavy steel triple-barbed hooks when it was finally brought aboard.

On Sunday, we went to Gold Beach and Brookings on the South Coast. In Brookings, we went to the Azalea Garden and admired huge wild azaleas, some bushes 20 feet tall by 20 feet across. The next day, we took a Mailboat Hydro Jet to the town of Agness 32 miles up the scenic Rogue River. On Tuesday, we fished without success for salmon on the Rogue. (Although chinook can run over 40 pounds, salmon tackle looked comparatively dainty.) Even when salmon are plentiful, I’ve found them tough to catch after they enter the rivers because they cease feeding. I’ve caught one (on the Umpqua in the ’60s) but otherwise consistently failed in fishing for salmon in rivers, whereas Betty and I both easily used to catch them at sea. Now, she gets seasick, probably results of meds she takes, and our area, once a magnet for silvers (or coho), isn’t as good as the South Coast where chinook are still plentiful. If caught, wild silvers, classified as endangered, have to be released. Betty likes to fish, though, so we’ll probably give the Rogue another shot. It is the best river in Oregon for chinook, and if you hook one — and keep it — you really have something. We also might explore renting a boat locally when the fall run begins. (It’s cheaper and a lot less trouble than buying a boat.)

Bottom line, based on my “vast” experience: catching bottom fish is easiest; halibut are a lot of work; and salmon, if you can catch them, are the most fun. Halibut and salmon, freshly caught, are delicious. I might go halibut fishing again, but if I do, I’ve gotta get in shape first.