Robert “Bob” C. Sproull aka “Doc” (“Papa” to his Grandkids)
by Jan Girand 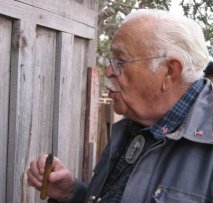 Doc Sproull calling “sooowee” to his namesake, Grumpy Doc the pig, at the Block Ranch in the Capitan mountains a few months ago. Grumpy Doc was a wild pig that Joe Hesseling, Block Ranch employee, had trapped and was fattening for a human feast. Probably realizing that, Grumpy Doc gives reason for the adjective portion of his name. Moments after this photo was taken, Grumpy Doc greeted Doc Sproull’s sociable call by charging him, head-butting the enclosure separating them. (Let it be known that Doc Sproull is never grumpy.) Photo by Jan Girand.

Retired prosthodontist Doc Sproull now applies, to good and fun use, his state-of-the-art metallurgy artistry and tools to other avocations. He makes “little Billys,” among other treasures, for lucky recipients. He has made, over the years, hundreds of unique and often humorous trophies with little Billy the Kid figures affixed to a wooden base with an appropriate label to give to young Billy the Kid Outlaw Gang Members (whom we fondly call Billy Kids) and some of their elders who win at annual BTKOG campout events and contests. More recently, Doc also applied his hands and skills making Billy Bolos for sale to help stoke the organization’s depleted treasury. All of Doc’s metallic little Billys are made with lead-free pewter. 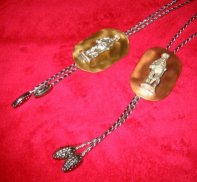 Doc also makes something else unique… he searches for large ant hills, often finding the perfect specimens far from home. The search and journey are the best parts of the adventure for him. Once he finds a prize-winning ant hill, he pours his molten pewter down the hill’s primary pathway from where it spreads into its many sub-pathways. The resulting cooled pieces, each one different, that he pulls from the sand, resembles a small delicate many-branched tree, coral, cactus or even an animal for the discerning eye. After it is carefully painted, the piece is “stuck” to a stand with an appropriate name plaque.

Born in 1920, Bob Sproull originally hailed from West Virginia, grew up in Pennsylvania, served 30 years in the military and a total of 46 years practicing dentistry, most of the time in a specialized field: prosthodontics. He had followed the example of his father, Bert Sproull, who practiced dentistry in western Pennsylvania from 1918 until his death in 1952 at age 60. Bob has many fond memories of his father.

In Bob’s after-Army-career and extending into his more relaxed years, he has enjoyed the balmy clime of El Paso, Texas. His many and varied interests and avocations include–but are not limited to–studying early southwestern history, searching for buried historical treasure, and reading mystery novels. He is an easy-going, affable fellow with a droll sense of humor and nearly always seen with an unlit cigar in his mouth. 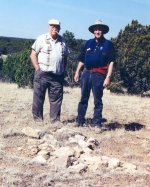 But first: As an enlisted man, Bob served 39 months during World War II in the 80th Infantry Division, Patton’s Third Army, which saw savage combat. Bob was discharged after World War II and enrolled in dental school at the University of Pittsburgh. After graduation, he volunteered to be commissioned in the Army and remained in the service for a total of 30 years. It was during this period that he received his training in Prosthodontics and was Certified by the American Board of Prosthodontics as a Diplomat of that specialty. During World War II and the Korean Conflict, he served under direct enemy fire.

While serving in Korea, Bob became friends with another Doc: a gentle, talented young officer named Jack Kevorkian. Many years later, Doctor Kevorkian became widely known as “Doctor Death” for assisting desperately suffering people in their own euthanasia. Doc Sproull recently reached out, by letter, to communicate with Kevorkian in prison; he received a gracious reply. But that is another story. Doc Sproull has many stories, has known many memorable people, spanning his lifetime.

Because of his roles as clinician, researcher, teacher, lecturer and compassionate man, he was in constant demand and became noted as one of the finest prosthodontists in the Army. His responsibilities included the education of seven prosthodontic residents and more than 40 interns. (For those like me who had never heard of a prosthodontist, this is the definition found on the Internet: A dental specialist who is skilled in the replacement of missing teeth or oral structures. A prosthodontist has graduated from dental school and will have two or three more years of specialty training in an American Dental Association-accredited graduate educational program. Prosthodontics is one of eight dental specialties recognized by the ADA.

Bob became an internationally recognized expert on color-matching of natural teeth. He said his total lack of knowledge on the subject when he graduated led to his desperate search for answers. He came to realize that nobody in dentistry knew the answers. It was experts in the field of color research who ultimately led him to the solutions. As a result of his studies, the first spectrophotometric analysis of natural tooth enamel was obtained and dentistry entered the 20th Century. His color-matching articles are now considered classics and two of his articles were republished in a group of the best 24 articles by his peers in the past 50 years.

When he retired from the Army as a Colonel, he was Chief of the Hospital Dental Service at William Beaumont Army Medical Center, Chief of the Fixed Prosthodontic Service, and Director of Intern and Resident Training. From 1973 until his retirement in 1996, he had a private, specialized, dental practice. 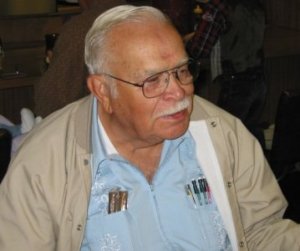 Bob Sproull enjoys his historical treasure-seeking hobby with metal detectors, which includes excursions to ghost towns and camp-outs. In 1968 he became a charter member of The Prospectors’ Club of El Paso, with a membership of like-minded friends. He had first begun to explore sites with metal detectors in West Germany from 1961 to 1965 while serving in the Army in Heidelberg. His many adventures–from finding a murdered woodsman, to getting a small mouse drunk, to finding priceless objects for the Heidelberg and Ladenburg Museums–are still deeply satisfying to him.Besides his many other activities and avid interests, Bob is a collector extraordinaire. His collections include (but are not limited to) pre-Columbian artifacts, bronzes and an awesome research library of early southwestern history. Because of his extensive library (and because he has read those books), authors and other researchers often call upon him to provide them with historical information.

Would you believe, in addition to his many other hobbies, skills and associations, he and his bride of 57 years, Peg, are gourmet cooks and members of a gourmet cooking club? Bob and Peg share a variety of common interests, including camping, collecting art and traveling and exploring–which they enjoy together.

Mary Margaret Moran Sproull, “Peggy,” as she is fondly called by all who know her, was a professional realtor until her retirement. Bob likes to point out that he is probably unique in having married a girl from Mars. (Peggy had taught for a year in Mars, Pennsylvania.) Peggy is as beloved among the couple’s associates and friends as is Doc. They have four children (born to them within five years from 1950 to 1955); their varied professions are in sales, teaching, law, and naval aviator-turned-security-supervisor. Doc and Peg also have a growing number of grandchildren. Doc calls his beloved supportive wife Peg a “class act” and humbly credits her with all of his successes and strengths. And no doubt too, for his long life filled with funshine.