Elizabeth Fackler is an author of many novels; her best (in my opinion) are the historical novels, Billy the Kid, the Legend of El Chivato, and Texas Lily, which is partly based upon the life of John Chisum. Fackler does careful historical research to assure the lives and times of her subjects are accurate. Her research naturally led her to separate the facts from the more popular fictional portions of the tales told and written about the handsome and photogenic Pat Garrett. Her facts show that six-foot-five-inch Pat was unworthy of many of the mighty tall legends told of his law and order heroism and other deeds. Still, his daughter put her adored long-legged father on a pedestal where he did not belong, and she dedicated her life to being a good credit to his name. Her life of goodness and serenity, as well as her song-writing and singing talent has brought a good image to the Garrett name. 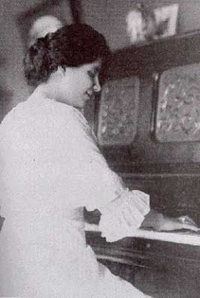 On the afternoon of July 4, at 102 South Lea, Roswell — the former home of Elizabeth Garrett — Elizabeth Fackler, her husband, Michael Sinkovitz, and Deborah Blanche held a public performance of My Eyes Have a Cold Nose.

The script, poem and words of the song were written by Elizabeth Fackler. The script, giving the historical facts of Patrick Garrett and his daughter, was read by Fackler. The poem — told in the voice and viewpoint of Elizabeth Garrett — was hauntingly recited by Deborah Blanche. Blanche portrays historical New Mexico women for the New Mexico Endowment for Humanities Chautauqua theater program. Michael Sinkovitz sang verses of several songs while accompanying himself on guitar. Most of his songs seemed to reflect Pat Garrett’s point of view. Intermingling the three differing viewpoints added to the poignancy and overall compelling performance by the three.

My Eyes Have a Cold Nose

For years, Elizabeth Garrett was best known as the blind daughter of Sheriff Patrick Garrett, the man who killed Billy the Kid at Fort Sumner, New Mexico the night of July 14, 1881. That event — whether by plain luck on Garrett’s part, or his shooting an unarmed and unwary man, or Billy’s betrayal by his friend Pete Maxwell, all of which has been credited by historians — overshadowed Garrett and his family. However, during the remaining 27 years of his life, he was a failure at everything he did and most of those who personally knew him had a low opinion of Pat Garrett; except his shy wife, Apolinaria, and his daughter — who loved him dearly.

Garrett was killed near Las Cruces in 1908 as he was riding to his property, preparing to sell it as a cattle ranch and anxious to rid it of sheep. Although Wayne Brazel was tried and acquitted, the reason for his murder and the person really behind it remains an unsolved mystery.

Fackler said Elizabeth Garrett was not born blind but some event blinded her not long afterward. For a few years of her early life, she attended a school for the blind in Austin. Later she studied singing in Chicago and New York and traveled the country singing and accompanying herself on the piano. After she moved to Roswell, she taught piano and voice and she wrote music. She acquired a seeing-eye dog, Teene, on whom she relied for her independence and for whom she developed a deep affection. She grieved the death of Teene; “not only my eyes but now my heart has a cold nose.”

Deborah Blanche spoke for Elizabeth Garrett, first as a young child freely roaming about her father’s ranch, later feeling abandoned at a school in a far away place. She said her father made two decisions about her, that she would live a normal life and that she receive as much education as possible. “Think your way out, daughter, and keep your head above your heart” was advice he often gave her.

Elizabeth through Deborah spoke hauntingly of her mother’s premonition the day her father was killed. And she told about attending the trial of the man accused of shooting him. She voiced heartache over her beloved papa being known only as the killer of the Kid, and his soiled reputation.

She was honored in 1917 when one of her songs, “Oh Fair New Mexico,” was chosen as the state song and many years later, it brought her a modest lifetime annuity that helped hold her above poverty.

She overcame any difficulties with her powerful faith, “ten fe.” Throughout, she live a life of serenity and beautiful music, often of her own making. “Time will tell whether a shot in the dark echoes longer than lyrics of love. Ten fe!”

Periodically, between poem verses read by Deborah, Michael sang haunting songs. One had a recurrent verse woefully lamenting that regardless whatever else he did in his life, he was only known as “the man who Killed Billy the Kid.”

Elizabeth Garrett died in October 1947 after falling over steps and gashing her head in front of a church while her cold nose, Tinka, howled and ran around her protectively.

Of Garrett, Elizabeth Fackler said, “I’m struck with the notion that her father was her child in the sense that she lived her life to protect him. All she could affect was his legacy. She offered herself, her name and life, as compensation.”