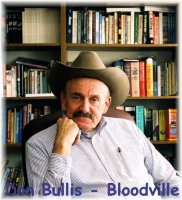 Don Bullis has another book with deep insights into New Mexico culture, history and policing. The book covers the end of the old west and takes the reader into the new west in the middle of the past century, following World War II, but some of the book’s characters have difficulty making the transition. Land grant developers, horses to helicopters, Bull’s Eye shows how difficult it can be for people caught up in the changing world.

The characters in this book pull the reader with them right into the dusty streets of the ghost town of Bull’s Eye. You can feel the jolt of the whiskey straight from the bottle, as Hovey, Dobbin and Arley Pope have a drink together in Dobbin’s saloon, which is nearly the only usable structure in Bull’s Eye.

A car crash and a body supposedly hidden in the old church in Bull’s Eye introduce the reader to New Mexico policing. It has been said that however government works in other states, it will be different in New Mexico, and that is certainly true of law enforcement and police officers. As a retired New Mexico police officer, Bullis demonstrates, through his characters, the intricacies of the criminal justice system in New Mexico.

Modern-day Indians use the law to attack and take the land back. They dash across the wind-blown prairie in high four-wheel-drive pickups rather than on horses. They shoot automatic weapons instead of bows and arrows. The young bucks in the tribe want to expand their land holdings, but Arley Pope and Piedra County are in their way.

Bullis very naturally weaves, as part of the story, several tales of New Mexico history–Black Jack Ketchum, robberies and hidden loot–through the fabric of the book. New Mexico in the mid-1900s was still the wild west.

The characters are people you know: some you have had to deal with or who live in your neighborhood.

The setting and scenario, like the characters, are fictitious, but placed in a slightly identifiable location in northeastern New Mexico.

To order your own copy of Bull’s Eye, ask for it at your local bookstore, or order it directly from the publishing company. www.abqpress.com