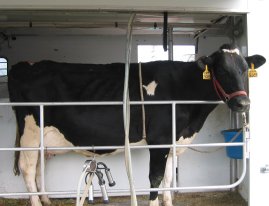 Got Milk? – A Growing Industry in New Mexico
By Jane Wiggins, Freelance Writer

Your childhood memories might include a glass, quart-jar of milk left on the breakfast table or maybe it was delivered to the back door by the milk man before breakfast. This is a pleasant, childhood memory for many people in the Pecos Valley. As early as communities were established, soon to follow were the small, often family-owned, hand milked dairies offering “fresh milk.”

Those days are contrasted by the black and white checkerboard appearances of the highly technical, automated dairies which are springing up in southeastern New Mexico. New Mexico State University estimated dairy support to the economy of the state at $1.5 billion in 2000.

Over 3,000 workers are employed by dairies, according to the New Mexico Department of Labor, with an estimated payroll of $64.8 million dollars. Although New Mexico has always had dairies, several factors have made the dairy industry boom here, according to Lombardi. Methods of milk transportation by bulk tankers have shortened distances to major population centers. Farm refrigeration tanks allow the milk to be stored for pickup, eliminating daily deliveries. (Lombardi said the milk is not touched by hand until it gets to your home.)

Fifty percent of milk production cost is related to feed, she explained. Most of the feed is purchased from local farmers, creating a major new market for locally grown feed crops. About 10 percent of the total cost of milk production goes to labor, and an average dairy employs one laborer for every 75-100 milking cows. The industry also relies on many local service industries including plumbers, electricians, milking equipment suppliers, veterinarians and others to fulfill the need.
Milk production led to the location of a cheese plant — Leprino Foods – in Chaves County. It is currently the largest mozzarella plant in the world. New Mexico cheese production moved to 8th in the nation. Leprino uses about 4.5 million pounds of local milk per day. One hundred pounds of milk makes about 13 lbs of cheese. The remaining whey is used to produce baby formula, powdered cream, sweeteners, pharmaceutical products, ice cream and yogurt.

“New Mexico is the Dairy state of the decade for the 1990s,” said Michael Looper, NMSU Extension Dairy Specialist. “The state has five major cheese plants.” The top five dairy counties are Chaves, Roosevelt, Curry, Dona Ana and Lea. These rated in a different place for each county within the top 60th percentile in the U.S., Looper said.

Chaves County Agriculture Agent, James Duffy was quick to explain the other supportive industries benefited by the dairies. “Other service industries supported are welders, the trucking, hauling, livestock and refrigeration industries as well as a sales ring,” he said. “Nutritionists, machine parts, semen sales, vets, drug supplies are helped, and even towels, soap, and detergent supplies are needed because of the industry. There is no doubt a lot of money is put into the economy by the dairies.” He added that dairymen are very supportive of 4-H, FFA and all kinds of youth agriculture activities. Dairies find a good quality, high protein hay here, but there is just not enough of it, Duffy said. A milk cow eats an acre of hay a year, he added.

Recent evaluation method changes by the National Agricultural Statistics Service in determining milk component values have caused some dairymen to experiment by adding Jersey cows to their herd. Variations in milk composition can affect the value of milk for manufacture of cheese and other dairy products.

The more commonly seen Holstein cows are mostly black and white, (some red and white) larger framed cows that roughly give twice as much milk as a Jersey, but with a lower nutritional content. The industry generally uses the volume-heavy Holstein to pump up their milk production.

In contrast, Jersey cows are on the low end of production, but their milk is rich in protein, calcium and other nutrients. Jerseys are brown or brown and white, smaller and are economic producers for their size.

Other milk cows include the Ayrshire breed, which originated in Scotland. It is a medium-sized breed and red and white in color. Ayrshire produce a high quantity and quality milk. The Milking Shorthorn originated in England. It is a medium-sized animal, of red, red and white or roan in color. She is a versatile breed, producing a high volume of milk with high butterfat and protein levels.

The first importation of the Holstein-Friesian breed to North America was from Holland in about 1881. The American Herdbook reports the sale of a bull and cow in Winnipeg, Canada. The vast majority of the breed are traced back to two animals. Mount Victoria Farms, in Quebec calls the resulting progeny strains from these strains the Rag Apple Line. An estimated 95 percent of dairy cattle are purebred Holsteins or display Holstein characteristics.

Milk breed cattle from the Island of Jersey and Guernsey were recognized as excellent milkers in New England as early as 1815. The resulting stock were called Alderneys and possessed rich creaming qualities in their milk.

According to Philadelphia Promotion of Agriculture, an early notation tells of a cow, when fed in “the usual way” with potatoes yielded eight pounds of butter on less food than ordinary stock. Fed on an excellent pasture of orchard grass and white clover another produced 14 quarts of milk per day, yielding more than 8 lbs. of butter with an excellent rich yellow color that it appeared an artificial color had been added.

Flavor of the Future? 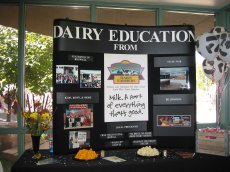 Joseph C. Lea: From Confederate Guerrilla to New Mexico Patriarch, the book by Elvis E. Fleming, is available at the Historical Society for Southeast New Mexico, 200 N. Lea Avenue, and also at Cobean’s Stationery, 320 N. Richardson Avenue, Roswell. The book sells for $25, with over 260 pages plus 66 illustrations. It was published by Yucca Tree Press in Las Cruces, in cooperation with, and to benefit, the HSSNM.

The author, Fleming, is city historian, member of and archivist for Historical Society for New Mexico, as well as Eastern New Mexico University-Roswell professor of history, emeritus.