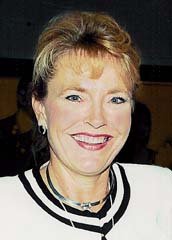 Connie Patrick, director of the Federal Law Enforcement Training Center, and Ray Havens, assistant director, presented a united front before a packed crowd at the Artesia Wool Bowl on Wednesday, September 11, in remembrance of the first anniversary of the American terrorist tragedy in New York, Washington DC and Pennsylvania.

She commended Artesia residents for their friendly community spirit and show of patriotism. She said she is proud of FLETC’s role in the protection of the country and envisions the center as an important leader in the protection of America. Patrick became the fifth director of FLETC, and the first woman to hold the post, on July 29, 2002.

The future of FLETC in Artesia looks very good, she added, as the law enforcement training classes are expected to double in all agencies. The estimated number of students trained this year has increased to 37,000 — 12,000 above 2001, with a projected number of 56,000 expected next year.

“This is what (the terrorist actions) of 9/11 have done,” she said. “FLETC has become a key asset in terms of requisite training agencies who protect our borders and help Homeland Security accomplish its mission.”

In addition to the training of Federal Air Marshals, the FLETC will add pilot and Secret Service training programs, as well as the continued training of the Bureau of Indian Affairs and 12 other basic programs. The other agencies include Border Patrol, the Immigration Service, Transportation Safety Administration, Alcohol Tobacco and Firearms, Department of Energy, and state and local training programs.

Although numbers are classified, Patrick said thousands of Federal Air Marshals who were trained at FLETC (Artesia) are flying the skies today protecting our nation.

“Training is the glue or cohesive tool or mechanism that implements the policy of nine law enforcement agencies currently being trained at FLETC,” she said. Agencies who participate at the center receive instruction in a variety of trainings including driver training, firearms, classroom, behavioral science, security, interviewing and reporting.

FLETC also operates facilities on behalf of the Department of the Treasury for the International Law Enforcement Academy at Gabarone, Botswana and U.S. Border Patrol training at Charleston, South Carolina, operating with an annual budget of $200 million.

Patrick is married to John Patrick, Jr., an attorney and retired lieutenant colonel with the Georgia Air National Guard, commander of the 224th Communications Unit in Brunswick, Georgia. They have four children.

She began her law enforcement career in 1976 as a deputy with the Brevard County Sheriff’s Office. She was a Special Agent and supervisor with the FDLE and became the assistant in charge of the Tampa Regional Operations Bureau. She is a graduate in criminal justice from the University of Central Florida and the FBI National Academy in Quantico, Virginia, the Florida Criminal Justice Executive Institute and the Federal Executive Institute, and is very active in many state and local boards and councils.

In March 1996, Patrick joined the FLETC as director of general training. She directed the faculty and staff in the development and management of programs in support of basic, advanced and specialized law enforcement training. She was designated the assistant director in 1998, serving in administrative function, budget and finance, personnel procurement, property management, facilities management, information systems, security and internal audit.

The director said she welcomes FLETC’s proposed move from the Department of the Treasury to the Department of Homeland Security. “Approximately 70% of our workload projections are for bureaus which have been identified as those proposed to go to Homeland Security,” she said. “Regardless of its organizational placement, FLETC anticipates substantial increases in training requirements in the next several years.”