HEAT — acronym for High Energy Access Tools Corporation — has opened its newest training facility in southeastern New Mexico. The address for this range reads Tinnie, New Mexico, but headquarters is located 1/2 mile north of it, and the range is safely nestled deep within the rolling and unpopulated hills of Arabela in Lincoln County. 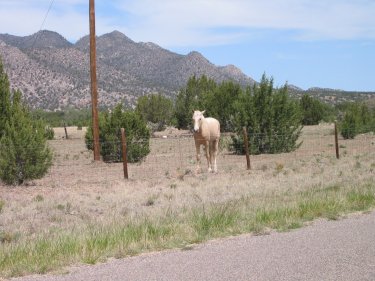 On the road to Arabela

The last Saturday in June, HEAT staff briefly opened their grounds to the public for a guided tour of the facility and to give an explanation of what it is.

Although guided tours of the range site were given, no cameras were allowed beyond the area of the headquarters.

One of the reasons they held their “open house” was because of worrisome rumors circulating in the Hondo Valley and in Chaves and Lincoln counties. Those rumors indicated it was many things that it is not. A place to test powerful explosives. A place to train foreign soldiers of fortune. And so the rumors went. These, like many rumors, have some small truth embedded in them but are blown (pun intended) all out of proportion.

Basically, it is a private contractor company that takes bids to provide training of defensive tactics. It is a non-military organization, but run to military standards, said Francis “Frank” Wells Fish, director of security.

HEAT is a for-profit corporation that trains — by contract — groups (not individuals), including U.S. military, various government agencies and all branches of law enforcement. It also trains foreign military groups, but only those from “Allied nations and approved by the U.S. State Department,” said Fish when briefing the small gathering at the old Latigo Ranch headquarters at Arabela June 29. 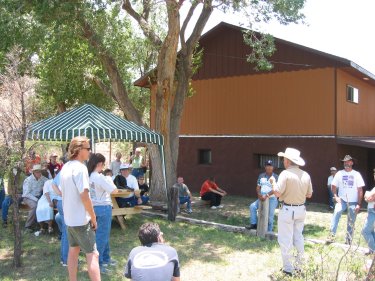 They teach specialized security and defense tactics such as those used by law enforcement SWAT teams and military Special Forces. Many of the personnel who do the training are themselves retired specialized military and law enforcement officers who had first applied, in real-life situations, many of the tactics they now teach. And they teach those types of specialized teams how to further improve what they already do.

Until recently, HEAT kept a low profile, but it has been established in the area since 1998, when the corporation first began leasing a building at the Roswell Industrial Air Center south of Roswell on what was once the Walker Air Force Base. That location — HEAT’s Tactical Training Center — remains its primary base of operations in New Mexico, where it provides classroom training, urban operations and tactical training on aircraft. At that location are five “useless and unused” decommissioned airplanes for training and rehearsal of techniques used to deal with such crises as air terrorists.

Currently, the center at Roswell has 15 instructors. People presently in the area are temporary but soon staff will be moving in and purchasing homes.

They are a U.S.A.-based international company with offices in many parts of the world, Fish said. HEAT is their New Mexico-based company. When it began, its products were precision explosives. By using research and development, they scientifically developed the application of smaller, even minute, quantities of explosives to achieve precise and well confined results. They use grains rather than pounds of explosives to blow a specific object, such as a lock off a door, or a specific small area, and nothing more. The materials they use have undergone all kinds of tests and are ecologically safe, approved by OSHA and the EPA.

Purchasers of these products needed training for the proper and most effective use of the material. That expanded into other types of training, including shooting marksmanship and SWAT-type tactics that include clearing buildings.

HEAT and their students have been doing these various forms of training at the RIAC for four years. Wanting to expand further and include pistol and high-powered rifle ranges, they began to search for a perfect location for a large range far from populated areas, and a place with available water. Discovering Latigo Ranch in the Hondo Valley on the market, they knew they found that perfect place.

The land they recently purchased has 7,500 acres; their range uses approximately 500 of those acres.

The firing ranges and training facilities are in a long narrow valley with rugged arroyos and rock faces. The high rolling hills surrounding the site effectively muffle the sounds of gunfire, as well as stop any possible stray bullets. They use no automatic weapons, submachine guns, nor test weapons or lasers, said one of the staff in response to visitors’ questions. Mostly small arms, but also common types of rifles are used in training. “No, we don’t store weapons on the premises,” was another response given by a staff member during a guided tour.

There will be from 20 to 40 individuals training in a group at any one time, and most students stay in dormitories at the HEAT Center south of Roswell.

The entire surrounding area is unpopulated and has no range animals. Targets are made of steel, and extensive dirt work has been done for each range. The shooting ranges are dug-out pit areas, similar to large earthen water tanks for livestock, with surrounding high solid dirt walls.

At other range facilities, when one range is in use, the others must shut down for safety, but that is not necessary at this site. These shooting ranges are well designed for multiple use and multi-purpose, said Steve Matoon, director of operations and training, and one of the staff who drove a tour vehicle on open-house day.

Visitors saw concrete, cement-block and brick structures simulating tall buildings. There was an impressive “shoot-out house,” which is a 4,000-square-foot wooden structure, complete with furniture and designed so the floor-plan and building’s shape can be quickly changed for different training scenarios. They have buses, cars and vans for practicing their tactics.

“This range facility is one of a kind, no other like it,” said Fish.

HEAT hires locally for dirt work and construction. Fish said they invested $1.6 million in the past year’s economy, and $6 million in the past five years, which benefits Chaves and Lincoln counties. HEAT employees and their students use 600 to 700 hotel rooms a year, buy meals, rent vehicles, rent apartments and will impact real estate because staff will be bringing in their families to permanently live in the area.

“We are here for the long run,” said Frank Fish of HEAT.

Send an Email to editor@roswellwebmag.com , giving your Email address and your mailing address, and we will mail this (below) unique collector postcard to you with a Roswell, New Mexico postal stamp.