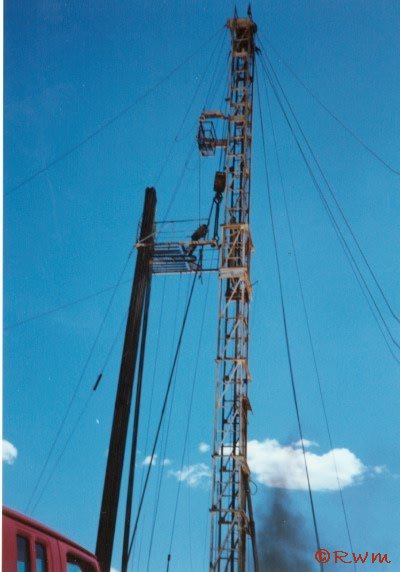 New Mexico Legislators and the legislative finance gurus watch prices of oil and gas as if they had an interest in the wells. They do.

The two largest industries in the state do not pay any taxes. Oil and gas is the third largest industry in New Mexico behind the schools and government.

It has not always been that way. Agriculture provided large revenues for the state in the 1920s when the State Land Office received the first check from oil royalties. On July 2, 1924, Flynn, Welch & Yates sent a check, $125, for production from wells in the Artesia field. Production began in 1922 with a gas completion in San Juan County potentialing for 37 million cubic feet of gas a day. In 1926, Lea County had a commercial producer near Maljamar. This was followed by marginal discoveries at Hobbs. Then in 1930, Humble hit a well that produced 464 barrels of oil per hour. The boom was on.

By October 1937, New Mexico Magazine reported that there were fifteen known oil fields in the Permian Basin and as of January the region produced 112,630,831 barrels of oil. Although by July 1937 there were 1,717 wells producing oil and gas in the state, there was discussion about what would happen in 25 years if the oil was depleted. The good news was the proven reserves were 600,000,000 barrels for this new industry. New Mexico was the sixth largest producer in the nation.

Revenues increased rapidly .The September 1937 issue of New Mexico Magazine said that the annual payroll in Hobbs was over a million dollars. During the month of June 1937, Lea County contributed 1/4-million dollars to the state educational fund. By the end of 1937, royalties, bonuses and taxes from oil and gas were $4,741,000.

The oil and gas industry pays sales taxes, severance taxes, conservation taxes, production taxes, Ad valorem taxes, income taxes, royalties, and bonuses. The state receives back, half of the royalties paid to the federal government. The industry in 1938 employed 3,500 people, not including the drilling contractor employees. The industry spent $19,300,000 annually in New Mexico, in addition to taxes and royalties.

65 years later, oil and gas, the state’s third largest industry, is the largest single producer of revenue to the state. New Mexico is fifth in the nation in oil production and second in natural gas production. The overall economic activity resulting from oil and gas activity in 1996 was $5.3 billion. The direct economic impact from oil and gas only was $2.4 billion according to a study by New Mexico Tech’s Petroleum Recovery Research Center.

There are some 650 oil and gas producers in the state. The majority of these operators are independent, family owned businesses. As acquisitions take place, there are fewer major, integrated oil companies. In 2000, these operators produced oil and gas valued at $2.6 billion. In a study by New Mexico Tech to determine the tax effect of one natural gas well on taxes, other than taxes paid solely by the industry, Tech determined the taxes amounted to $49,596.

There are over 45,000 wells in the state. Revenues from these wells produce over 90% of the money in the Permanent Fund and about 30% of the General Fund.

When an operator leases minerals from the state or federal government, the government receives money for the lease rights. These are collected by the State Land Office in New Mexico.

If production is established, royalties are paid, based upon the value of the product sold, to the State Land Office. The Land Office distributes these funds to the beneficiary educational institutions.

Together, these taxes produced $1.3 billion for the General Fund. During the same year, royalties were $615.1 million. Revenues from leasing were $22.9 million. In 2002, the Legislature will spend about $3.8 billion in general fund appropriations and about $8.7 billion in total appropriations. Roughly half of the general fund is allocated to public schools; one-third to state government; and one-sixth to higher education.

When someone puts a pin in the oil and gas industry, New Mexico squeals.

A Study of the Coach and Bus Manufacturing Industry
Part I

This is the first of a series about the bus manufacturing industry. The series will cover the history of those companies that located south of Roswell – TMC, NovaBUS, Inc. and MCI International Inc.– and also that of other bus manufacturers in North America. There are currently six corporations, including NovaBUS, that manufacture heavy buses in the U.S.A. and Canada; of those, two are currently healthy.

The coach and bus manufacturing industry has been a strong and vital presence in Roswell and Chaves County for three decades. The area may soon lose this valuable resource because NovaBUS, Inc. is threatened with closure unless a buyer is found.

Even now, little is left of a coach and bus industry that once had an extensive physical plant employing as many as 3,000 people, that spread out across the Roswell Industrial Air Center with plants at several locations when operations at Transportation Manufacturing Corporation were at their peak. That enterprise had, for a while, also brought to the area several satellite companies to supply some of their coach and bus components and services.

Severely scaled-down operations and management groups with skeleton crews are all that remain of the two local entities: NovaBUS, Inc. and Motor Coach Industries International Inc. Even if put together, the number of remaining employees of these two unrelated local company subsidiaries are small compared to what was once a large transportation manufacturing enterprise south of Roswell.

In 2001, NovaBUS underwent several severe lay-offs, and is now left with only a minimal number of employees and management staff.

NovaBUS began life as a Canadian entity in 1993 when it acquired the Motor Coach Industries manufacturing plant in St. Eustace, Quebec. The next year, NovaBUS, Inc. – incorporated as a U.S. subsidiary of the Canadian NovaBUS – acquired the manufacturing rights of the Rapid Transit Systems (RTS) bus from Transportation Manufacturing Corporation and its sister corporation, Motor Coach Industries, Inc. when TMC permanently shut-down.

The RTS bus was first developed by General Motors. TMC purchased it and began to manufacture it at their Roswell facility in 1986, and continued to manufacture that model until TMC closed in 1994.

USA’s NovaBUS then set up its operations to continue to build that bus in what had been TMC’s Plant Seven. Even at its operations’ peak, NovaBUS utilized only a portion of what had once been an extensive TMC infrastructure with several manufacturing plants, as well as extensive offices for operations management. Although using a smaller work-space and with a crew of 600, NovaBUS was capable of producing five entire bus assemblies a day at their plant.

The principle product of NovaBUS was always the heavy-duty RTS urban transit bus. On the contract, the customer could chose between two widths for the 40-foot length stainless steel body, as well as a variety of other options. Those buses, to meet public transportation requirements, were designed for installations of wheelchair lifts.

According to several former TMC employees, who ask to be unnamed, one of the perceived problems is that the RTS is a 12-year bus. That means the bus is warranted for 12 years, and built to last in steady transit service for 12 years. RTS is too heavy, too expensive and simply lasts too long before needing to be replaced with a new and updated version. Therefore, it is not competitive in today’s rapidly changing national and international transportation market.

According to those same sources, the second perceived problem for NovaBUS is that it has taken too long to develop a low-floor bus.

Motor Coach Industries International has a small satellite group of employees – approximately 45 – most of whom had formerly been TMC employees. Their operations are in what had once been TMC’s administrations building.

Their operations include engineering, research and development, and sustained engineering groups; their home office is in Schaumburg, Ill.

After TMC closed its operations in 1994, this small entity has been the only remaining presence in Roswell of what had been TMC, a sister company to MCI in Winnipeg and Ft. Garry in Canada, and MCI, Inc. in Pembina, N.D.

For years, their then parent company, Greyhound Corporation, was located in the Greyhound Tower, later named Dial Tower, in Phoenix. When Greyhound Corporation was at its peak and in the acquisitive hands of CEO, John W. Teets, it was a huge conglomerate corporation. It owned several transportation manufacturing companies and transportation services, but it also owned Armor (known for its processed meats) and Dial (known for its soaps) and other consumer products, food services, financial services and other large diversified corporations.

The company that was called Greyhound Corporation, like TMC, no longer exists. Soon, perhaps, the same will be true of the NovaBUS Inc. plant in New Mexico.

The future is also uncertain for the MCI International satellite south of Roswell. The rumor has been going around for a while that the American-based coach and bus manufacturing facility of MCI Inc. in Pembina, North Dakota, will close within the next year or two. In 1962, to satisfy American consumers with an American-made product, the Canadian company, Motor Coach Industries, had incorporated and built the bus manufacturing plant in Pembina, within the U.S. Now, for various reasons, MCI no longer requires a facility on U.S. soil.

The several unnamed former TMC employees and others within the industry have chalked up the major problems that plagued Roswell’s bus manufacturing industry to poor management practices. Throughout the history of the coach and bus manufacturing companies located near Roswell, several major internal problems continued to undermine their productivity and profitability.

Those problems, many of which culminated on the assembly line, included:

* Poor record-keeping or control of parts that, in turn, led to serious parts shortages on-line because replacements for missing and damaged parts were not ordered; this caused costly assembly line delays or even shut down the line.
* Open-ended contracts that allowed customers to revise bus specifications, specials and options, even after the buses were on the assembly line.

These are but a few of the serious problems that continued to plague the industry locally; top management rather than the community was blamed for most of them. The one problem that does reflect upon the community, according to other bus manufacturing companies, is the lack of a Right to Work law. That issue will be discussed in coming weeks.

Regardless the reasons why, the bus manufacturing industry in Chaves County appears to be in serious jeopardy.

A lingering asset of the local coach and bus industry is that it imported many employees, including upper management, who have remained and continue to be productive Roswell and Chaves County residents.