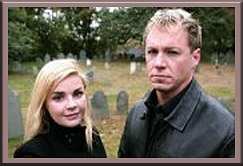 Gail Porter and Chris Fleming take a spirited road trip through the West Coast of America looking for the ghostly locations where the legends of stage and screen reside.
She is a self-confessed skeptic, he is a “sensitive” able to detect paranormal events beyond the range of the five senses. Together their mission is to investigate the “Dead Famous”!
What will Gail and Chris uncover? And will Gail lose her skepticism during some of the show’s most intriguing paranormal experiences? (Dead Famous photo of Gail Porter and Chris Fleming.) 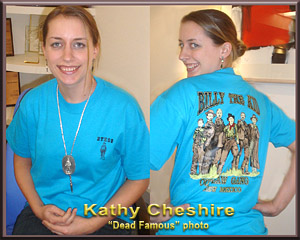 Kathy Cheshire, researcher and production secretary for a United Kingdom TV production company, recently contacted members of the Billy the Kid Outlaw Gang. Representing Twofour Broadcast Ltd, she said her company creates the Dead Famous series. She and Doc Sproull of El Paso, Texas, BTKOG’s historian, developed a warm rapport and kept emails flying across the ocean. Doc sent Kathy a quantity of material–history of Billy and the Lincoln County War, and a current copy of the BTKOG Outlaw Gazette. Joe and Carol Hesseling also sent her a BTKOG T-shirt, which she wore, upon request, for a photo to be sent to the group since she would not be coming to New Mexico with the film crew. She also wore the custom-made BTK bolo made just for her by Doc Sproull. 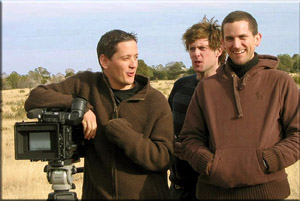 Kathy said their shows are two-sided. One side is biographical and a commentator focuses strictly on history and is a skeptic to all but facts. The other side is attuned to the paranormal, with a commentator inclined towards the spiritual. Each program deals with an American star or historical figure. Kathy said they are now airing their third series, and their program has begun showing in the United States on both A&E and Biography TV channels. Their production crew visits locations significant to the featured characters to gather ambience and learn whether their spirits still linger there. Many selected people and settings are ones already associated with ghost tales.

The series they are now working on is based upon the Wild West. They are particularly interested in Billy the Kid Bonney. Kathy said when she and her group tried to research the subject of Billy on the internet, they kept finding references to BTKOG (thanks to the efforts of the association’s webmaster, Joe Micalizzi), which led them to contact association members.

Kathy thought a productive idea would be for their UK crew to come to Lincoln County, New Mexico to search for Billy’s essence, and to also interview BTKOG members. The members designated Joe Hesseling–the organization’s president, himself a genuine cowboy–as the interviewee. 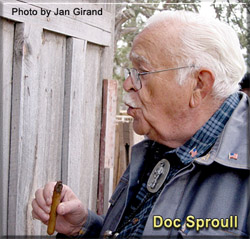 Doc Sproull provided Kathy with snippets of BTK history and suggested additional places to visit and people to see for this film segment.

An example of information Doc gave Kathy in an email: “In Sophie Poe’s book, Buckboard Days, she tells of moving into the apartment on the second floor of the Lincoln County Courthouse after she was married in 1883. To quote her (page 209), ‘There was one feature of the new home which I did not enjoy. The back stairway, up and down which I had to travel many times during the day, was still stained
with blood, a grim reminder of the day, two years before, when Billy the Kid had shot and killed his guard, James W. Bell.’ When Dr. Lee [within the past year] used Luminal on the boards at the top of those stairs, the blood stains were clearly visible,” wrote Doc to Kathy. He suggested that the film crew, when they visit Lincoln, ask to see the photo taken after Luminal was applied to that area of the back stairway of the courthouse. 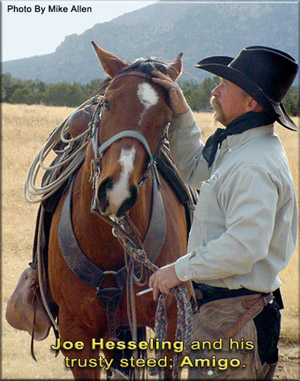 Billy the Kid Trail Ride posse in front of the Lincoln County Courthouse. Joe Hesseling (far right) led the posse over the Capitan Gap to the old Las Tablas town site (Old Block Ranch), Billy the Kid after escaping from the Lincoln County Courthouse, spent some time in Las Tablas, before continuing to Fort Sumner on a Block Ranch horse. Photo by Joe Micalizzi

Saturday morning, January 14, RWM editor, Jan, found the film crew– producer Niall Carmichael, director and cameraman Bernie Schaffer and soundman James Lloyd–outside the Ellis Store Bed and Breakfast in Lincoln conducting an interview. It was a gray, overcast day, uncommon in New Mexico more like the days they were accustomed to in England. The crew had spent the night–and would spend more nights–at the Ellis enjoying David and Ginny Vigil’s warm hospitality and Ginny’s culinary talents. Later Saturday night, they would conduct a serious search for the ghost that haunts the Ellis. They hoped that resident ghost would be a ham and appear for them. 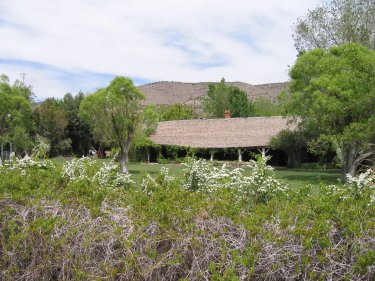 (The Ellis Store, a fine historic Bed and Breakfast owned and operated by David and Ginny Vigil. This property is for sale. For more information, see the Industry page, this issue, or call the Vigils at 505-653-4609. Photo by Jan Girand) 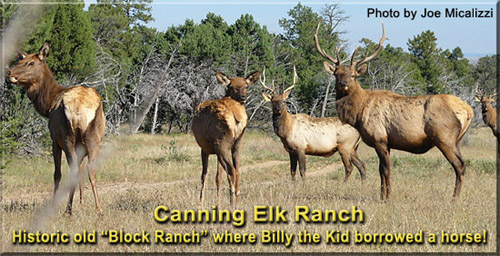 Doc and Peg Sproull and other BTKOG members had prearranged to meet the crew later that day, at 1 p.m., in Capitan to lead the way to the Canning Elk Ranch where they would meet and interview Joe Hesseling.

Soon the caravan of cars arrived at the ranch. Before driving up the winding road towards the house, Jan told the crew to be prepared to stop and enjoy the sight of magnificent elk, many with huge racks of antlers. They did spot, stop and take photos with zoom lens of a large herd of elk drinking at a stock tank in the distance. (Above photo was taken by Joe Micalizzi a previous year.)

“Why don’t any of those elk have antlers?” Jan asked Joe Hesseling in the presence of the crew a few minutes later.

Now Jan doesn’t claim to know much about that kind of wildlife but she recalled Carol, Joe’s wife, saying that male elk begin dropping their antlers in late February and grow an entire new set by the next fall. It was now mid-January, not late February, but Jan had heard Carol comment that some of the yearlings had already dropped their antlers.

“Well, where are the boys hanging out, Joe?” asked one of the BTK members, hoping to give the crew an opportunity to photograph them in their full regalia.

“Probably down at the bar,” drawled Joe. No doubt that’s what he calls their watering hole. 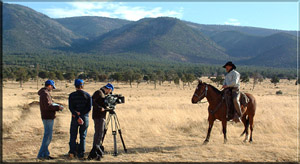 By mid-afternoon, the heavy cloud-cover lifted and the New Mexico sky turned its usual turquoise blue. Members of the British crew kept commenting on the beautiful scenery and wide open spaces, not a cliché here. The winter-dormant grass was tall and golden and rustled when people walked through it. The BTKOG members, present to offer Joe moral support, had to exercise care to not walk during filming because the sensitive sound mikes picked up the noise of the dry grass. 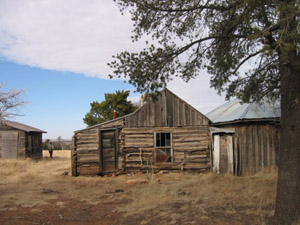 The interview was held near an old ruin on the ranch that Joe called “the Indian house” because it is a picturesque setting. The crew filmed Joe riding his horse across the vega towards the Indian house. Then Joe dismounted and stood beside his horse while Niall asked him questions about what kind of a fellow he thought Billy had been, why Billy had developed such a bad reputation, and what life must have been like for him and other residents of Lincoln in the 1880s. 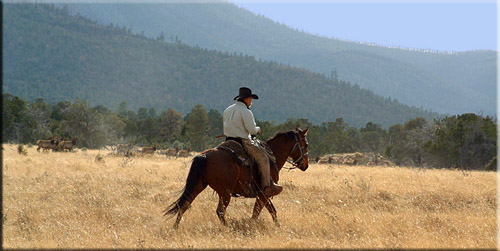 Towards the end of the segment’s filming, Joe rode his horse away, across the vega, a departing silhouette against the setting sun. The crew was delighted with the results and their visit to Lincoln County, New Mexico. (Photo by Mike Allen) This article and photos can also be found on the official BTKOG website: www.btkog.com