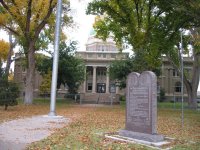 Chaves County Courthouse on a wet fall day. Note the fence around the building — proof construction and renovations have finally begun.CHAVES COUNTY COURTHOUSE

After several delays, Chaves County is beginning its long anticipated additions and renovations to its historical courthouse — with its landmark green dome — located in the center of Roswell. Its occupants have been relocated, mostly to the new Chaves County Administration Building, otherwise known as the Joe Skeen Building at One St. Mary’s Place. When construction and other work is fully completed to the courthouse, some of those occupants will return and therein resume their work and legal proceedings.

Julie Pearson is the project’s architect and the contractor is the Jaynes Corporation.

Some of the following county and courthouse history came from Elvis E. Fleming’s book, Captain Joseph C. Lea, and some was provided by the county manager’s office.

In the latter 1800s, the town of Lincoln was the county seat of the huge Lincoln County, and Pecos Valley residents found that too inconveniently far to do their business. Residents of the area around the town of Roswell (its population 343 in 1890 according to Fleming), and Pecos Valley residents residing in what is now Eddy County, wanted their own counties. Proposals for two new counties were the focus — with pros and cons — of the 1888 and 1889 Legislatures.

The proposed county with Roswell as its seat also included Dexter, Dunken, Elkins, Hagerman, Lake Arthur and Mesa, and had a population of several hundred residents.

Joseph Lea declined to have the new “Roswell” county named for him, and preferred instead that the name be Chaves, for Colonel Jose Francisco Chaves, a prominent Hispanic Republican who was 1889 speaker of the Territorial House. Some believed he was chosen primarily to gain a political advantage for the new county.

In 1889, Joseph C. Lea donated the land, a full city block known as Courthouse Square, for the new courthouse. Fleming wrote in his book that a June 11, 1889 editorial in the Pecos Valley Register, stated “Let us have a good courthouse, gentlemen, something that we may look upon with pride after it is built.”

Lea planted trees and bluegrass in anticipation of the new courthouse. The Legislature appropriated $30,000 for building the courthouse and specified the construction should take no more than two years. The limit of time and money limited the result. The first courthouse was completed in 1890 and ready for occupancy in 1891, on time and budget, but within 10 years was inadequate.

In 1909, many residents opposed tearing down the courthouse and replacing it with a new one. Like the additions and renovations to today’s courthouse, that decision was controversial but necessary. The vote for the public bond was close but it did pass. The building — the only domed courthouse in New Mexico — was constructed in 1911 at a cost of $164,000, and was dedicated in 1912, the month and year New Mexico became a state.

In her speech for Leadership Roswell in November 2000, Tammy Sanner, Chaves County Grant Coordinator, said it “resulted in some very creative financing. The commissioners knew that statehood was eminent for New Mexico and any public debt would be absorbed by the federal government once it took over the Territory.” The commissioners voted to go into $130,000 debt for the new county courthouse building, and that debt was assumed by the government when New Mexico became a state in 1912. 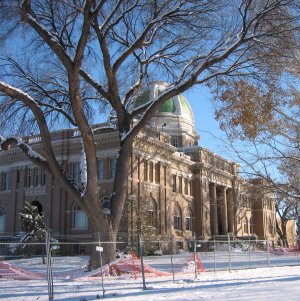 Chaves County Courthouse as seen from E. 5th Street on a wet fall day. It is surrounded by fencing because construction and renovations have begun.

It was Pecos Valley’s first burnt brick building. The bricks, made of Pecos Valley mud, were kilned in Roswell.

The building began with 1,000 piles — brought for this purpose from the Manzano Mountains — that were driven 20 feet down to the hard strata; then cement was poured for the foundations. The courthouse was virtually “built upon a rock,” Will Robinson wrote in 1948 in the local newspaper.

An architectural firm named Rapp of Trinidad, Colorado designed the building. In her Leadership Roswell speech, Tammy Sanner said they used a restrained form of contemporary Beaux-Arts Classical style. According to the National Register of Historical Places, she said, the building’s classical symmetry, its dominating central entrance and both arched and rectangular windows, were influenced by that style. She quoted the Register, “Although devoid of the figured sculpture and excess of decoration characteristic of the Beaux-Arts movement, the building displays such typical motifs as shields, medallions and garlands.” Costs prevented some of the planned ornateness.

According to Will Robinson, reporting for the Roswell Morning Dispatch, the outside brick came from St. Louis, Missouri, brick for inside walls from Neodosha, Kansas, cement from Paola, Kansas, concrete from near Roswell, sandstone from Indiana and the marble from Georgia.

The green terra-cotta dome is actually two domes, an exterior and an interior one. The outside dome once had a skylight and the interior one had stained glass windows. Leaks developed along the light fixtures on the dome’s ribs and the lights were removed. Plans for the current renovation include restoring the dome to its original state.

In 2000, this courthouse was voted one of the most beautiful historic buildings in the state of New Mexico.

The facade of the planned addition, to face Virginia Avenue, will match that of the original structure. Changes will considerably increase the size, security and productivity of the courthouse. Restoration of the original part will bring the building to necessary code requirements. The addition, as well as the esthetic and infrastructural changes to the Chaves County Courthouse will bring it out of the 1912 era and into the light of the new millennium, to meet its county’s continually growing size, needs and countless electronic advances of the present and future age. 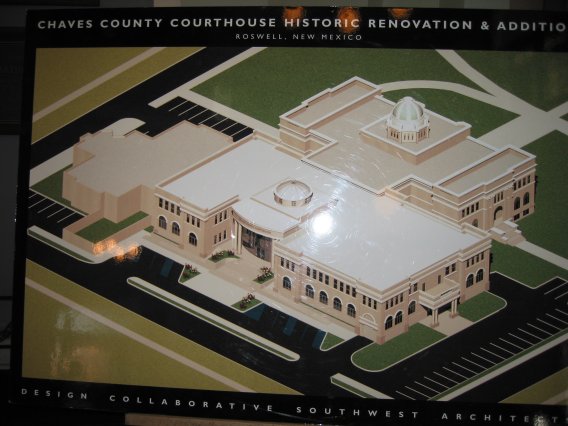 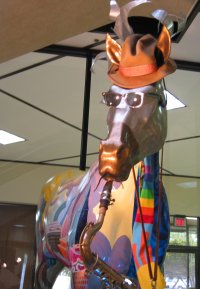 Jazz up close and personal

TRAIL OF THE PAINTED PONIES

Have you ever wondered if the Painted Ponies have a purpose? They do!

The Trail of the Painted Ponies was a state-wide artistic community project begun in 2001. The horse was the chosen critter because of its importance to New Mexico. One artist designed the basic “naked” (blank pallet) horse, each weighing 130 pounds. Artists submitted ideas and sketches, and corporations, businesses and individuals provided sponsorships. The proceeds from sale of each horse benefits a non-profit charity within the community.

Communities that participated in southeastern New Mexico were Roswell, Artesia and Carlsbad. 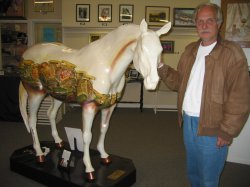 Horse Cents and artist Loren Creech at The Gallery 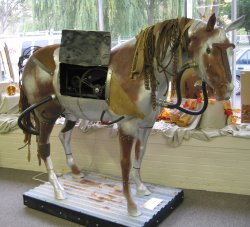 Horse Power at The Gallery 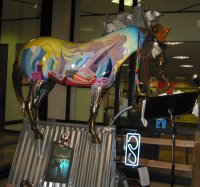 Jazz on a Hot Tin Roof at Wells Fargo Bank 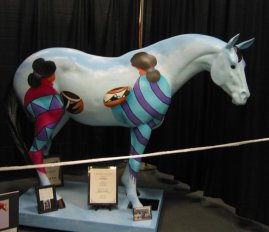 It sounded like a good idea! The Trail of the Painted Ponies was to be a great public campaign that would raise funds for New Mexico’s nonprofit charities, raise awareness of the state’s artists and their talents, and boost the economy of the state of New Mexico.

It was to be a public art campaign very much like the cows in Chicago, the pigs in Cincinnati, and the moose in Toronto. Sponsors purchased life-sized replicas of quarter horses, commissioned artists to paint them, and planned to auction them off in Santa Fe. Sponsors “ponied up” from $5,000 to $50,000 for the sculptures and commissioned artists, who were paid a minimum honorarium of $1,200, to create a unique piece of art. Fond-raising auctions were planned with the hopes that $1.5 million could be raised for New Mexico charities.

Then came the horrific events of September 11, 2001. Auctions for the ponies were cancelled and sales came to a halt. Many of the life-size sculptures were sold, but numerous ponies from southeastern New Mexico were left to “graze” in Santa Fe. Carlsbad had sponsored 21 ponies, Roswell sponsored 11 and two in Artesia. On artist was commissioned to paint four ponies in Carlsbad.

Sponsors were concerned that those remaining would be auctioned off without a reserve price so they decided to bring their ponies home to Carlsbad, Roswell and Artesia. Sponsors have begun an aggressive campaign to market these beautiful creations in their own “pastures” with all proceeds going to their designated non-profit organizations. 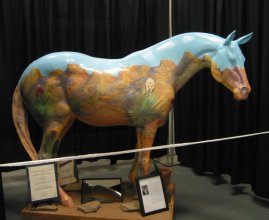 Under the direction of Carrol Tracy, ponies are back in local “corrals” and featured in local and area media, making appearances at events such as Roswell’s Chile Cheese Festival and Quilt Show in late September, at Carlsbad’s Calico Christmas on November 29 and 30, and in Carlsbad’s Electric Light Parade on November 30.

Selected ponies will also be on view at the Parker-Braden Auction house at 4303 National Parks Highway in Carlsbad at its regularly scheduled auction events.

These beautiful creations by southeastern New Mexico artists are “stabled” in Carlsbad’s businesses along Canyon Street at Carlsbad Museum and Art Center in Halagueno Park, Best Western Stevens Inn at 1829 South Canal Street, as well as in the Living Desert Zoo and Gardens State Park, Whites’ City and Carlsbad Caverns National Park. Information on Artesia’s ponies can be obtained by calling (505)746-2744 and for Roswell (505)623-5695.

Carrol Tracy, “head wrangler” of the sponsors and marketing agent for Carlsbad’s ponies can be reached at (505)885-8316. Further information and location of the (Carlsbad) ponies can be obtained from the Artist Gallery at (505)887-1210. 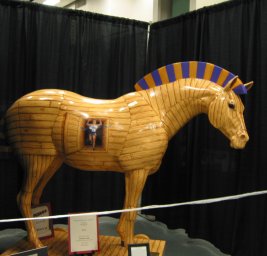 THE TRAIL OF THE PAINTED PONIES

The Painted Ponies of New Mexico
took my mind back to long ago
when horses were all over the land —
their labor was so much in demand.
They were not painted or put out for view
nor did the press come to interview.
Painted Ponies our local artists did create —
all proceeds made, they would donate.
They were in Santa Fe on the auction block —
September “911” exploded; our nation grieved in shock.
Some Painted Ponies have found a new home,
the others were brought back home to roam.
Our artists have been given talents untold
it’s sad that all works of art were not sold.
If you have ever wondered about their fate —
they are loose again —
someone forgot to shut the gate!