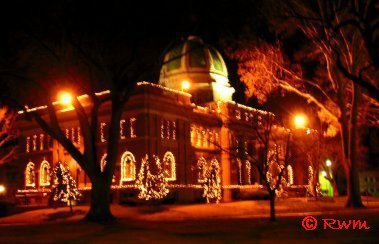 (Much of the following courthouse history was adapted from notes of a speech written and presented by Tammy Sanner for a Leadership Roswell class in November 2000. Sanner is the grants writer for Chaves County. Additional history herein was provided by the Chaves County manager’s office. Rwm)

The restoration of this wonderful county courthouse building, which has been a Roswell landmark for nine decades, has long been a pet project of Judge Chip Johnson. The restoration will become a reality largely because of Johnson’s strong interest and hard work to see that this building will endure for many decades to come. Without the restoration, which will also bring it into compliance of fire, safety and handicap-accessible codes, this fine old place would no longer be useable as a public building.

In 1889, the New Mexico Territorial Legislature split up Lincoln County, which was then much larger that it is now. The new county — Chaves — was born, with a population of about 300 that included Dexter, Dunken, Elkins, Hagerman, Lake Arthur, Mesa and Roswell.

This new county was named for Col. J. Francisco Chaves, the Territorial House speaker. He had also been, in the 1860s and 1870s, a delegate to Congress.

The Territorial Legislature gave the newly established Chaves County $30,000 and allowed it two years’ time to build the courthouse. The limited amount of time and money did not allow evaluation of its current needs and planning for its future requirements.

Captain Joseph C. Lea, an early Chaves County pioneer, donated the full city block — known as Courthouse Square — for the courthouse. J.P. Pauley and Sons of St. Louis were the building’s contractors, and the burnt bricks were made locally out of Pecos Valley mud. The original courthouse, built at a cost of $29,000, was the first brick building in the Pecos Valley.

This first County Courthouse, built at the present location, was completed in 1890, ready for occupancy Jan. 1, 1891, and grass for a lawn was planted by the sheriff about three months later.

Within 10 years after it was built, the courthouse became inadequate for the county’s needs.

The decision to tear down the first courthouse and build a new one was just as controversial then as the decision is now, at the beginning of the new millennium, to historically renovate and add onto the current courthouse, and build the new Chaves County Administrative Building.

In 1890, county residents voted; the decision to issue a public bond to raze the old and build the new won by a narrow margin. The new building — the one we now have — was built in 1911. Plans for financing the construction were farsighted. The county commissioners expected New Mexico’s statehood — the nation’s 47th — to be eminent. The commission assumed the construction debt of $130,000, believing it would become part of the federal debt once New Mexico was a state. When New Mexico acquired statehood in 1912, the U.S. government did assume the debt for the new Chaves County Courthouse.

Chaves County got its beautiful, ornate courthouse with its beautiful green terra-cotta dome. It is New Mexico’s only domed courthouse. The building was then far more than the young state needed. However, 90 years later, it’s space and infrastructure is grossly inadequate to meet today’s requirements.

Rapp and Rapp of Trinidad, Colo. was the architectural firm that designed the building. According to the National Register of Historic Places, the firm used the contemporary Beaux-Arts Classical style in restrained form. While the building does not have the extravagant figured sculpture — which might have been dropped from the plans because of cost — it does have liberal use of shield, medallion and garland ornamentations. And it has the classical symmetry, the dominating central entrance, and arched and rectangular windows influenced by that style. Although the building is ornate throughout, some original drawings showed even more extravagance was once intended.

The foundation for the new courthouse was built upon Manzano pine. Piles made of pine from the Manzano Mountains, 1,000 of them at a cost of $10 each, were driven 20 feet deep to the hard underlying strata because the Roswell area had a high water table. As a result of this good planning, this massive courthouse developed no cracks.

This courthouse had been built to include housing for the coroner, school superintendent, a live-in janitor, the sheriff and a law library. It also had a dormitory above the original courtroom to house jurors called to serve, who came from outlying areas of the county too far for daily commute. Restoring the original courtroom and dormitory is included in the plans for the building’s historical restoration.

Some modifications were made to the building in the 1970s. Those included the blue color scheme on the second and third floors that were originally beige, matching the floor tiles. More recently, the outside stone masonry was cleaned and repaired.

The confluence of three rivers — the Spring, Hondo and Pecos — has made the area now known as Roswell and Chaves County an important site throughout the history of human habitation in North America. The area was contained within the original homeland of the Mescalero Apaches and overlapped the hunting grounds of the Comanches.

The first documented European visitor was Don Antonio de Espejo, who explored the Pecos Valley for Spain in 1583. The first attempt at European settlement in the area was made by Gaspar de Castano de Sosa, who led an unauthorized colonial expedition from Mexico in 1590. He was arrested for his troubles, and the settlement failed to materialize.

The first historically documented settlement in the Roswell area is an 1867 mention by the United States Government Surveyor of a settlement of crude adobe shacks at “Rio Hondo.” This is believed to be the present neighborhood known as Chihuahuita. At approximately the same time, the area became a campsite on the Goodnight-Loving Trail, which opened in 1866. The trail brought Anglo ranchers from Texas to the area, including John Chisum, resulting in the establishment of the ranching industry in Southeastern New Mexico.

In 1870, Van Smith founded the small town of Rio Hondo, which consisted of a general store, blacksmith shop, adobe corral and Main Street. In 1873, when the first post office was established, the town was renamed Roswell in honor of Smith’s father.

In 1890, the discovery of Artesian water in Roswell marked a change from ranching to agriculture as the main industry in Chaves County. This, along with the extension of the railroad to Roswell in the mid-1890s, began a population boom in the area that lasted until the effects of the Great Depression reached southeastern New Mexico. Most of the historic homes within the Roswell Historic District date from this boom period.

With the railroad came numerous people from throughout the United States and Europe who brought with them new architectural tastes.

The new settlers imported bricks, clapboards and nails to create Queen Anne, Prairie, Bungalow, Victorian, Italianate, Tudor, and many other styles of homes. Consequently, the architecture of the Roswell Historical District mirrors the people who populated the region. Like the people, the styles are varied and frequently of mixed heritage. Most structures are a composite of various architectural styles reflecting the melding of indigenous, Hispanic and Anglo cultures, both east and west, at the crossroads known as Roswell.

The following information was released by the New Mexico Lottery on December 27.

She said she plays “Roadrunner Cash” two or three times a month. She realized she won the top prize as she watched the Christmas Eve drawing on television. It was both a Christmas gift and a birthday gift because her birthday fell a few days before Christmas.

This was the fourth largest prize since the New Mexico Lottery began in April 1996, and the second largest “Roadrunner Cash” prize since that game began in February 1998.

“I worked hard and I will keep on working,” the woman said at Lottery headquarters in Albuquerque when she went there to receive her prize. “It will be business as usual for me cleaning houses. This gives me freedom from having my kids take care of me.”

She said her work ethic has impacted her view of winning. Two days after learning she had won the large prize, she spent Wednesday cleaning someone’s house. “I started working when I was three and my parents had me help in the fields,” she said. “The way I was raised, you work first and play later. I passed that on to my kids.”

When a friend told her she could now afford a new car, she said she would instead get her muffler repaired.

The woman also sometimes works as a proctor for students taking their college entrance SAT and ACT tests. Many of those students are eligible for Lottery Success Scholarships, the beneficiary of New Mexico Lottery profits.

By the end of this month, more than $131 million in Lottery profits will have been used for New Mexico education. Of that, more than $64.5 million has been set aside for the Lottery Success Scholarship program, which has already helped more than 18,000 New Mexico college students. The remainder, more than $66.5 million, has helped with school repairs and construction.

(Note: The woman chose to give no media interviews.)