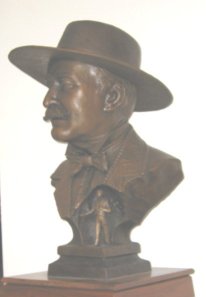 Above is on the plaque under the bust of Chaves, created by renowned sculptor Robert Summers, displayed inside the Chaves County Courthouse in Roswell.

The printed dedication to Colonel Chaves beside the bust reads:

“José Francisco Chaves, for whom Chaves County was named when it was created in 1889, was a prominent Republican politician, former army officer in the Civil War, an avid prosecutor and legislator, and a strong advocate for statehood.

Chaves was born in Las Padillas, Bernalillo County [New Mexico], on June 27, 1833. He was educated at St. Louis University and other eastern schools, where he studied the classics and medicine. As an army officer, Chaves served in the Navajo Campaign in 1860. During the Civil War, he served alongside Kit Carson and Ceran St. Vrain in the New Mexico Campaign against the Confederates.

Chaves was elected Territorial delegate to Congress in 1865, where he served three terms. In the late 1870s, Chaves became a district attorney in Socorro where he was known as a strict enforcer of the law.

Chaves later served in the Territorial Legislature, and a bust of him is on display in the Capitol. He was president of the council at the time Chaves County was created. Captain J.C. Lea insisted on naming the new county after Chaves instead of himself in a gesture to him for favors to the budding village of Roswell. Chaves supported Roswell’s New Mexico Military Institute in its early struggles to survive. The figure at the base [inset] of the bust shows Chaves giving the New Mexico Military Institute commencement speech on May 1901 in his capacity as Territory Superintendent of Schools.

On November 26, 1904, Chaves was having dinner with friends in Piños Wells, Torrance County. Someone outside the house shot and killed him. The killer was never brought to justice, although many felt the political “Santa Fe Ring” was behind the slaying. Chaves’ assassination remains one of the mysteries of New Mexico history.